A user on reddit recently asked how to resize a few widgets. With the “Notes” widget, it is pretty straight forward by changing the Layout.preferredWidth / Layout.preferredHeight as outlined in KDE’s Getting Started with Plasma Widgets article on the KDE wiki. However the user wanted to resize the System Tray and had no idea how to do so.

I personally wouldn’t recommend a new user modify the system tray, as it uses some fairly complicated code in order to embed other widgets inside itself (like the panel). However, this offers a learning opportunity for the reader on how a Plasma Widget is written, so lets jump down the rabbit hole.

First a refresher on how Plasma widget’s are structured.

A widget has 2 different “views”. The compact area that’s shown when there’s not much space, like when it’s in the panel, and the full view when there is enough room, which is shown in a popup.

When we do not define the full view, the main Item is treated as the full representation.

We can also ignore the “compact” representation, and show the full representation in the panel. With this, the widget will not have a popup.

The System Tray widget is a specical beast. In order for it to work, it needs to embed other widgets inside itself (like the panel). It embeds the Volume widget, the Network widget, the Notification widget, etc. Normal widgets (aka applets) cannot do this. It needs to be a special ContainmentInterface instead of the standard AppletInterface that a widget uses.

To get around this, the System Tray widget has a public “container” widget under the namespace org.kde.plasma.systray, which has some C++ magic to load a single private widget org.kde.plasma.private.sytray.

So, in order for the user to edit the system tray’s popup size, we don’t want to modify the “public” container widget’s code. Instead we want to edit the private code under org.kde.plasma.private.sytray.

I’m not quite sure where it defines full/compact representations. However this private widget is definitely different as it defines it’s own Dialog popup. I think that since it’s loaded as a ContainmentInterface, it needs to define those itself.

Note: The dialog for a normal widget is defined in plasma-desktop repo under desktoppackage/contents/applet if you’re interested in comparing them.

Back to the system tray widget. Now with the PlasmaCore.Dialog, the size of the dialog is the same size as the Dialog.mainItem, so if we look at it we see that the mainItem is passed an ExpandedRepresentation {}. If we look in the contents/ui/ folder, we see that there is an ExpandedRepresentation.qml file. So lets open that up as there does not seem to be any width/height definitions in the main.qml file for the dialog.

And there we go. Layout.minimumWidth/Layout.minimumHeight is what is controlling the size of the system tray width/height.

Again, I do not recommend changing the system tray widget. It’s actively being updated and bugfixed. However we can modify it for learning puposes.

If we add import QtQuick.Window 2.2 to the top of the ExpandedRepresentation.qml file, we can then use QML’s Screen variables like Screen.desktopAvailableHeight. Normally we should probably using plasmoid.screenGeography.height, however it appears that variable isn’t “defined” in this widget as it’s set to be a 0x0 rectangle.

If we set height to Screen.desktopAvailableHeight, the system tray popup should be the same height as our screen!

We can test with the following. Note that we do not use the private namespace.

Cool. Now lets try to get the popup to slide in from the right!

If we go back to the private system tray’s main.qml and look at the PlasmaCore.Dialog once more, we can see that the dialog specifies which location/edge/direction the dialog should appear from.

If we look at the API docs for the PlasmaCore.Dialog, we’ll see that the property is a Plasma::Types::Location enum value. So we should be able to change plasmoid.location to a hardcoded value of PlasmaCore.Types.RightEdge to make it slide in from the right.

In the above example, I restarted Plasma to test in my panel. As you can see, while it does animate the slide in from the right, it’s no longer positioned above the system tray. The reason why it’s on the left side of the screen is because it’s trying to position itself to the “left” of my bottom panel, just like we saw with the plasmawindowed window up above. 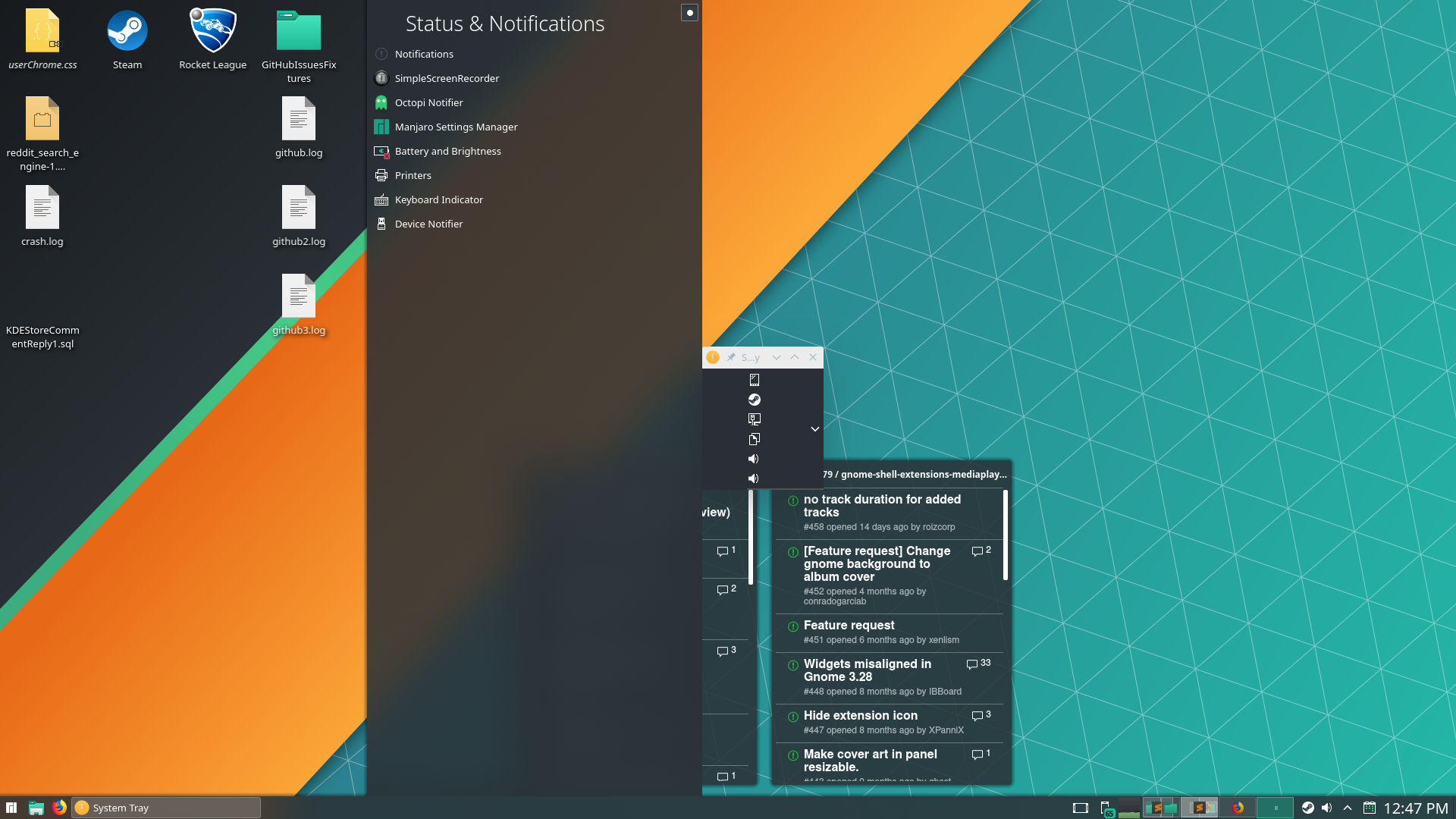 This is because the Dialog.visualParent is set. If we remove the visualParent: root line of code, the popup will now appear at the default location of (0,0), or the top left of the screen. 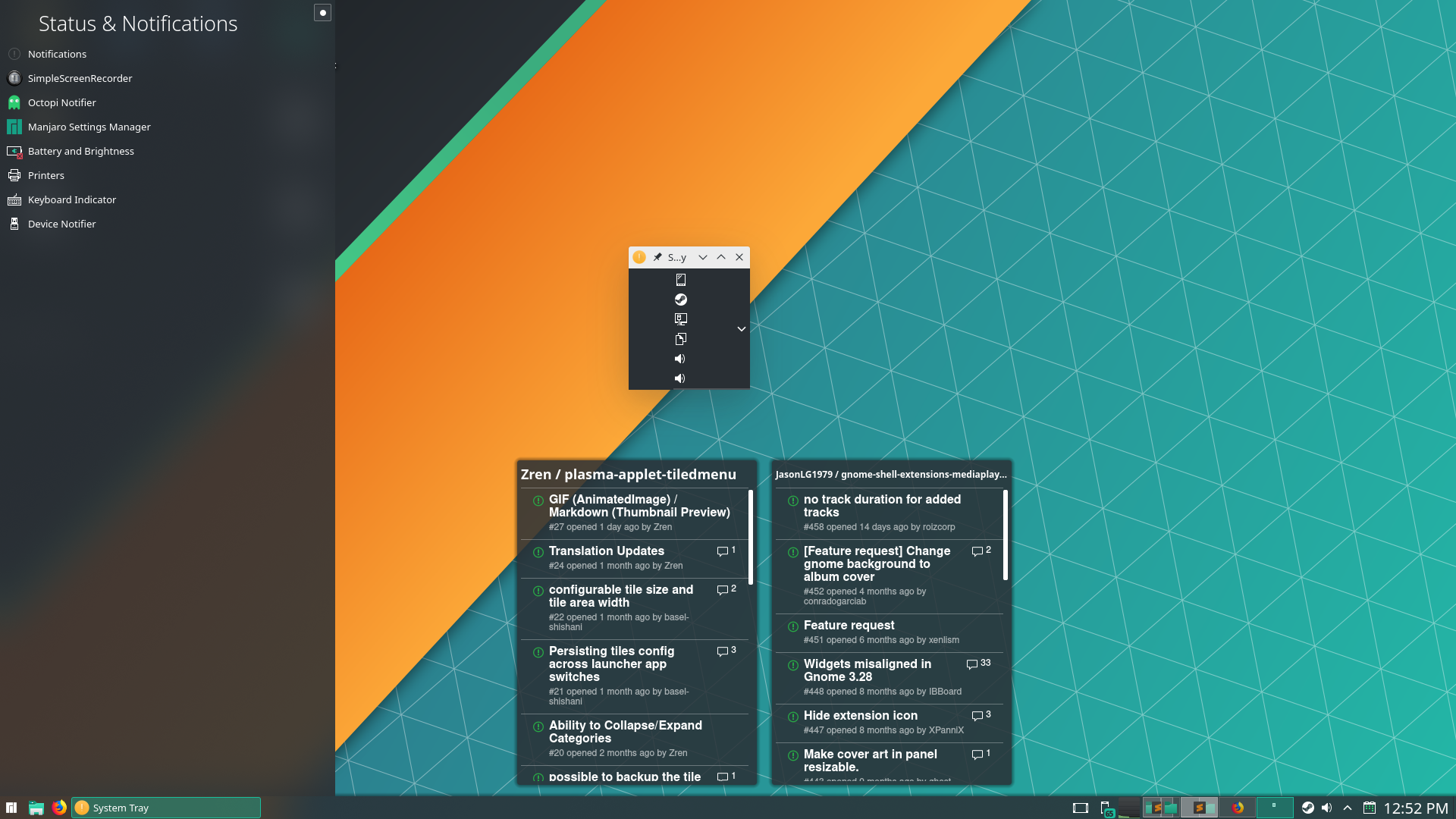 This is just for fun!

Reminder that editing files in /usr/share/plasma/plasmoids not recommended. Whenever your system updates Plasma, the files will be overwritten with an updated version with bugfixes + new features, or just revert it back to the original file.

While we could copy the system tray’s code to the home directory, I would not recommend doing this for the system tray, as it has a lot of C++ code that works with the QML view code, and using and older version of QML code you modified with new C++ code after a Plasma update could possibly cause PlasmaShell to crash. So while a system tray that opens from the right side of the screen is neat, a KDE Plasma tweaker should probably keep it as is.